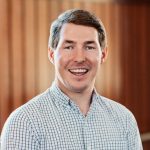 I’ll never forget my conversation with Ahmed. “The bomb hit our house. We had nowhere to go. So we came to Athens and have been here ever since.” Ahmed and I sat on the steps of a church in Greece surrounded by people of many different nations. He had travelled there with his family a year before, part of the first wave of Syrian refugees fleeing a conflict that would later become a civil war. I had travelled there during spring break with Reformed University Fellowship (RUF) at NC State. We had just eaten a meal together, provided by volunteers from the church and served by our group. I had helped fill up the drink coolers and bring them to the table.

“How in the world do I respond to that?” I thought, feeling very far from my comfort zone. “Wow, that sounds terrible. Why is there fighting going on in Syria?” I said, nervously. Ahmed spent the next 15 minutes telling me about all of the unrest in his home country and all of the different factions fighting with one another. We were only interrupted by the pastor of the church, making an announcement inviting everyone inside to hear a short devotion from the Bible. While a few people shuffled toward the exit, I followed Ahmed as he gathered his family and entered the church.

I’ve heard people wonder about the impact that one week-long mission trip can have. While I understand their questions, I wonder if those people have participated in such a trip. I’m reminded of Jesus’ words in Matthew 9:36-38 – “When he saw the crowds, he had compassion for them, because they were harassed and helpless, like sheep without a shepherd. Then he said to his disciples, ‘The harvest is plentiful, but the laborers are few; therefore pray earnestly to the Lord of the harvest to send out laborers into his harvest.’” Jesus doesn’t mark the harvest with a time or place. Anywhere that God’s Kingdom touches, that’s where the harvest is – Winston-Salem, North Carolina; Athens, Greece; London, England.

As those who are called into the harvest in the corner of the Kingdom where God has placed us, we have an amazing opportunity to learn from and support workers in other areas of the Kingdom. I was blown away by all of the amazing believers in Athens, weary but passionate in their service of the Lord of the harvest. I loved getting to see Syrian Muslim refugees flooding into a church to hear God’s Word preached. It got me excited to come back to NC State and to Raleigh, ready to watch and take part in the harvest where God had placed me.

We have a wonderful opportunity this summer to see and participate in the work that God is doing in London. God’s mission to draw people of all nations to himself will continue that week, just as it has for years before and will for years after. And we get to enter into that work with open hands to what the Lord will do. Then we get to return to Winston Salem with widened perspectives and refreshed hearts to re-enter God’s harvest here.

So, I invite you to come learn more about our London Mission Trip planned for July 3-11 this summer. We’ll have an Interest Meeting this Sunday (January 9) at 12:30pm in the Adult Education room upstairs. Lunch will be provided. It will be a great opportunity to learn more about the work that we’ll be entering into in London and to begin praying about joining us for the trip. I hope to see you there!