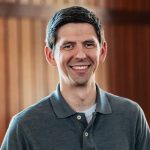 Reflecting on the passage last week from Joshua 6, I could not help but notice all the numerical repetition. It is fairly common in Scripture for numbers to have more than quantitative significance – think of the various uses of 7 and of 12. It is also common in biblical literature to use repetition to emphasize a point, such as in Isaiah 6 – God is not just holy, but thrice holy! So, repetition of numbers? What might be going on here?

Classically speaking, numbers have been thought to suggest certain qualities. Six is balanced and orderly, yet it is incomplete. The six directions of three-dimensional space must find their intersection at a seventh center point. The six outer hexagons of a honeycomb shape necessarily surround a seventh in the middle. Seven, then, carries the sense of completion. We see this in Scripture too, as six is the number of man (created on the sixth day; Rev. 13:18), and falls short of the perfection of seven (completion of creation/Sabbath; Year of Jubilee; “completeness” of forgiveness as in Matt. 18:21-22; use in Revelation 5:1, 8:2, 15:7).

Eight has a quality of renewal. Consider the musical scale: seven tones are required, but it is the eighth tone (the octave) which returns the scale to its home note, preparing the scale to be reiterated. Playing those seven tones gives you all the notes of the scale, but it is the eighth tone that brings resolve. In the Old Testament, the covenantal sign of circumcision was performed on the eighth day (Gen. 17:12), serving to “reiterate” God’s covenant with his people in that ceremony. Likewise, traditional baptismal fonts are eight-sided structures, serving to both connect it to circumcision and also symbolize the recapitulation of the cosmos with the new heavens and the new earth – a “reiteration” of creation, an “eighth day.” But nine is even more heavenly, reserved for the highest imaginable greatness. This is why we are “dressed to the nines,” “on cloud nine,” or go “the whole nine yards.” Perhaps this is why Dante has nine circles of heaven in his Paradiso, or perhaps why Paul lists nine fruits of the Spirit (Gal. 5:22-23).

Back to Joshua. God commands seven priests (fullness!) to carry seven trumpets (completeness!), and to march around the city only once for six days (incomplete?!) blowing the trumpets. But then, on the seventh day, they are to march seven times around, and blow the seventh total blast on the trumpets. See the movement from six to seven? Incomplete to complete? Yet there is one more sound that needs to take place: the shouts of the people (6:10, 16). The eighth tone from the eighth day people. You can almost hear each note of the musical scale blasted one by one, moving up in pitch until finally the shouts of the people complete the octave! And the walls come tumbling down.

This circular marching, in its eighth momentous action, causes the perimeter to be cast down – a city circumcision marking God’s covenant promise of God’s promised land for God’s chosen people. This symbolism is even more apparent in light of the events at Gilgal in Joshua 5, in which all those who had been born during the desert wandering received the sign of circumcision. What had been done sacramentally is seen symbolically again in their very first battle.

So, where is the “nine”? The beginning, the middle, and the end. The Commander of the Lord’s Army (Josh. 5:13-15). The One who fought the battle (Josh. 6:2; Heb. 11:30). The One who would come again to a future Jericho and bring salvation to Zacchaeus, “a son of Abraham” (Luke 19:1-9). The Sovereign God. The Holy One of Israel. The Savior of the world. The One who keeps all his promises. Alpha. Omega. Over all, perfection itself.

Do I think this is the primary way to read Joshua 6? No. Do I think we should apply a numerical framework on the rest of the Bible to decipher some sort of biblical code? Absolutely not. But I do think this particular text invites us into these themes, calling to our imaginative faculties to put two and two together, and to turn the vibrant diamond of Scripture to see some more of its wondrous colors. (And there are seven colors of the rainbow…just sayin’…)