You are here: Home / People / Connor May Kelly 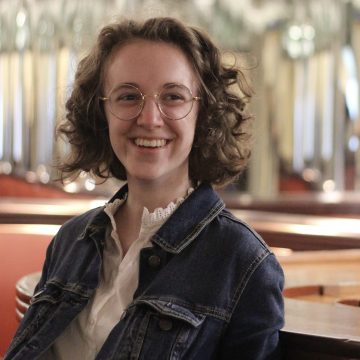 Connor May Kelly is a composer and multi-instrumentalist hailing from her native Charlotte, North Carolina.

She has performed and studied as a harpist from age five, and in middle school discovered popular music arrangements for the harp, fascinated by its ability to produce a distinct and broad range of colors and textures. She began to write her own arrangements, and quickly turned to original solo, chamber, and collaborative compositions, focusing primarily upon music’s unique ability to portray both irony and sincerity to listeners.

She has performed as principal harpist of the Brevard Concert Orchestra under the batons of Ken Lam and Keith Lockhart, the University of North Carolina School of the Arts Orchestra and Wind Ensemble under the batons of Maestro Thomas Wilkins, Karen NiBhroin, and Dr. Mark Norman, as well as holding the principal harpist chair of the Youth Orchestra of Charlotte from 2015-2018, with a Carnegie Hall debut in 2017.

Her music has been performed and recorded by a variety of artists and ensembles, including premieres of her “West by Northwest” by Après Moi, “The Old Hunting Grounds” by the UNCSA String Orchestra and conductor Karen Nì Bhroin, and her setting of Gerard Manley Hopkins’ poem “Peace” by tenor Glenn Siebert and collaborative pianist Dr. Allison Gagnon. Recently, she has received recordings of her works performed by the Akropolis Reed Quintet (“The Peddler’s Cart: A Grand Collection of the Weird and Fantastic”) and the Borromeo String Quartet (“Temple”).

Connor May received her BM in Music Composition at the University of North Carolina School of the Arts in 2022, studying in the studio of Mr. Kenneth Frazelle.